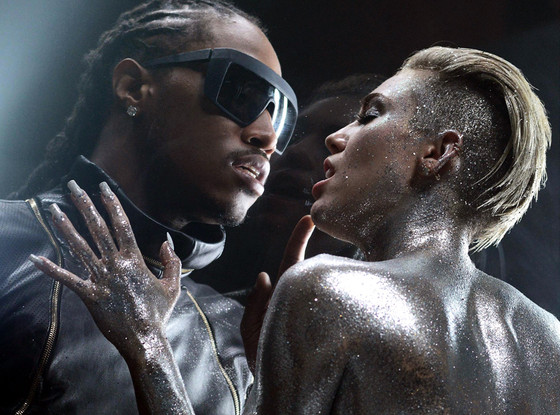 Future debuted the music video to his latest single, “Real and True,” enlisting Miley Cyrus and Mr. Hudson for the futuristic visuals.

The video  tells the touching tale of two male astronauts (Future and Mr Hudson) who discover a dead female astronaut (Miley Cyrus) and take her back to her ship so they can undress her, revive her corpse and cover her in glitter. The imagery joins into the song’s chorus, which finds Mr Hudson singing, “When the sun dies and the stars fade from view, Our love will remain real and true.”

In a recent interview with Rolling Stone, Future discussed Cyrus’s contributions to “Real and True.” “Miley heard the hook and instantly fell in love with the song,” he said. “She did her vocals and they sent it back to me and I wrote my verses to that and tried to come up with something unique. Her vocals are very strong and emotional on the song. She brings that passion to this record. Miley is really cool and down-to-earth; she’s always fun to be around and I’m always cracking up when I’m on set with her.”

“Real & True” was produced by Mike WiLL Made It. The song will appear on Future’s upcoming sophomore release, Honest, due sometime in 2014. Future is currently on the Would You Like A Tour? tour with Drake.