“The NFL and the NFL Players’ Association have no intention of making the COVID-19 vaccine mandatory for players, coaches or staff,” Sills said. “What we are focusing on is education. We want everyone to have the facts, and we believe that this is an important step forward.” NFL Wont Require Players Coaches to Get COVID-19 Vaccine 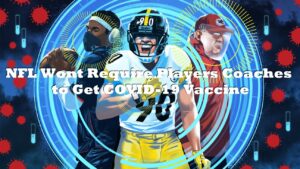 Sills mentioned the 2021 draft in late April as a league event in which teams hosting events involving only fully vaccinated people would have fewer restrictions than those that include unvaccinated people. He also said that while the league will have no requirements to get vaccinated, the hope is that everybody will.

“We’ll continue those discussions and go where the science leads us on that, but I think we’ve got a lot to learn between now and then. But we’re really going to focus on getting that education and continuing that dialogue,” Sills said. “We’re seeing a lot of dialogue between players, coaches and staff about vaccination. We hope that everyone gets vaccinated.” ref: Sports Illustrated reported.

Elon Musk, Jeff Bezos and Mark Zuckerberg topped the list of the 15 billionaires with the greatest growth in absolute wealth since pandemic lockdowns began in March 2020. 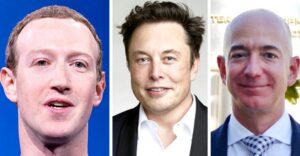 A year ago, the Institute for Policy Studies published “Billionaire Bonanza 2020: Wealth Windfalls, Tumbling Taxes and Pandemic Profiteers,” and began tracking billionaire wealth gains as unemployment surged. We teamed up with Americans for Tax Fairness (ATF) to track the wealth growth of America’s billionaires over the last year. This report summarizes the extraordinary growth in wealth of those now 657 billionaires based on real-time data from Forbes on March 18.

Here are highlights from the last 12 months of billionaire wealth growth:

They mostly multiplied their fortunes in the world of online goods, services and entertainment, as forcibly homebound Americans shopped, invested and diverted themselves in isolation. They include the owners of ecommerce leaders Quicken Loans, Square, Carvana, and cryptocurrency exchange Coinbase; social media sites Snapchat and Twitter; online streaming platform Roku; and digital ad agency Trade Desk. Nineteen other billionaires experienced increases of over 200% while 48 others more than doubled their fortunes with 100% + gains.