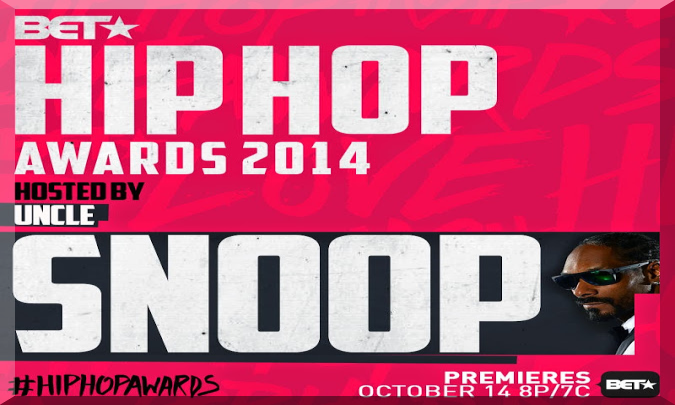 DRAKE, EMINEM, FUTURE, RICK ROSS, SCHOOLBOY Q, AND YO GOTTI UP FOR ALBUM OF THE YEAR

TAPING AT THE BOISFEUILLET JONES ATLANTA CIVIC CENTER IN ATLANTA.

Back by popular demand, Uncle Snoop and BET Networks team up once again to present the biggest night of hip hop with cyphers and legendary tributes that encompass the BET “HIP HOP AWARDS” 2014!  Highly respected with more than 20 years in the industry,

Uncle Snoop continues to set trends and pave the way for both new and established artists. At last year’s “Hip Hop Awards,” Uncle Snoop opened the show OG style, participated in star-studded performances and revealed the persona of his moniker DJ Snoopadelic by spinning on the turntables for various artists.

The awards will be taped on Saturday, September 20th, 2014 at the Boisfeuillet Jones Atlanta Civic Center in Atlanta, GA for the ninth year running, and will premiere on Tuesday, October 14, 2014 at 8:00 p.m. ET.  Directly following the awards at 10:00 p.m. ET is the premiere of “Real Husbands of Hollywood S2: Reunion Special.”

An entertainment icon, Snoop is affectionately known as Uncle Snoop in the music industry for the leadership and guidance he provides to both established and up and coming artists. With more than 20 years in the business, Snoop has become an international name for his work in music, film, entrepreneurship and philanthropy. Snoop Dogg is currently working on his next studio album with Pharrell Williams.

With last year’s show being a huge ratings success, leaves great wonder as to how Uncle Snoop will TURN UP this time around.  “Uncle Snoop put it down so lovely at last year’s show that we literally asked him THAT NIGHT to host this year’s show and we’re so glad he said yes. With the D-O double at the helm again bringing his unique humor, creativity and OG swag, BET ‘Hip Hop Awards’ 2014 will undeniably continue its reign as the biggest night of hip hop on television,” said Stephen G. Hill President of Music Programming and Specials, BET Networks.

Returning is the “I Am Hip Hop” Award, recognizing an individual who has made a profound imprint on hip hop music and culture throughout the years. Nominations for all categories, as well as confirmed performers, will be announced in the coming weeks. Also returning is Sprite® as a sponsor of the BET “HIP HOP AWARDS” 2014, presenting in part the always noteworthy cyphers and the “green” carpet.

Join the conversation on social media by logging on to BET’s multiple social media platforms:
• On Twitter by using hashtag: #HipHopAwards; follow us @HipHopAwards and @BET
• On Facebook by liking the fan page at facebook.com/HipHopAwards