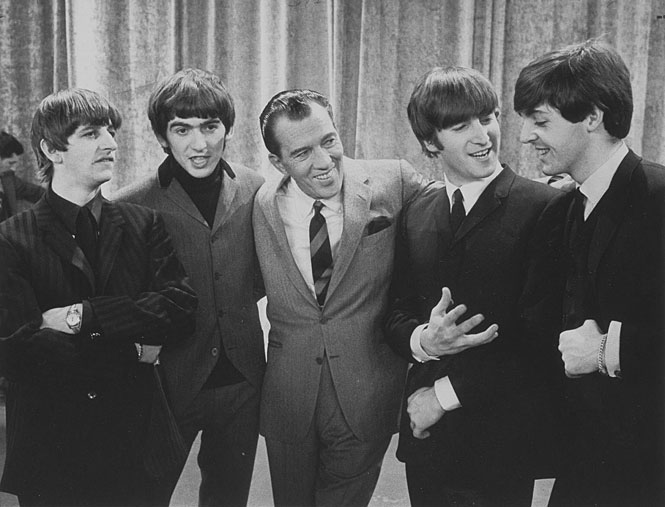 Eurythmics Reuniting For Grammy Salute To The Beatles

EURYTHMICS’ ANNIE LENNOX AND DAVE STEWART TO REUNITE
FOR ONE NIGHT ONLY ON “THE NIGHT THAT CHANGED AMERICA:
A GRAMMY® SALUTE TO THE BEATLES” ALICIA KEYS AND JOHN LEGEND TOGETHER
IN A SPECIAL PERFORMANCE JOHN MAYER AND KEITH URBAN TO PERFORM TOGETHERAND MAROON 5 SET TO PERFORM ON THE HISTORIC EVENT
TO BE BROADCAST SUNDAY, FEB. 9, ON CBSEntertainment Special Celebrates the 50th Anniversary of the Beatles’ Legendary
U.S. Debut Performance on “The Ed Sullivan Show,” and Will Air Exactly 50 Years to
the Day, Date and Time of the Original Event

Show Will Be Broadcast on CBS Exactly 50 Years to the Day,
Date and Time of the Original Event,
Considered One of the Most Historic Live Events in Music and Television

To commemorate the 50th anniversary of one of the most historic moments in music and television, The Recording Academy®, AEG Ehrlich Ventures and CBS will present “The Night That Changed America: A GRAMMY® Salute To The Beatles.”

The primetime entertainment special will celebrate the remarkable legacy of the seven-time GRAMMY-winning group and their groundbreaking first appearance on “The Ed Sullivan Show.” The two-hour show will tape on Monday, Jan. 27, 2014, the day after the 56th Annual GRAMMY Awards®, and will be broadcast in HDTV and 5.1 surround sound on the CBS Television Network Sunday, Feb. 9, 2014, from 8 – 10 p.m. ET/PT — exactly 50 years to the day, date, and time of the original event.

For updates and breaking news, please visit GRAMMY.com, and The Recording Academy’s social networks on Twitter and Facebook. Performers and presenters will be announced shortly.

“The Night That Changed America: A GRAMMY Salute To The Beatles” will feature today’s top artists covering songs performed by the Fab Four that momentous evening in 1964 and Beatles songs through the years, and will include footage from that landmark Sunday evening, as well as other archival material. In addition, various presenters will help highlight and contextualize the musical, cultural and historical impact of the group and this legendary performance.

The Beatles’ first appearance on “The Ed Sullivan Show” is one of the most watched television events ever — with 74 million people tuning in to watch the group perform five songs during the variety hour. It is considered by many historians and critics as one of the most important moments in music and television.

“The Beatles are one of music’s most iconic groups, who won their first two GRAMMYs, including one for Best New Artist, in 1964 — the same year they took America by storm,” said Neil Portnow, President/CEO of The Recording Academy. “As the GRAMMY Awards are Music’s Biggest Night®, it’s only fitting that we recognize this milestone moment in music history and pay tribute to this larger than life group and their enduring music and legacy.”

“Whether you were alive to witness it on television that night, or you’ve just known about it all your life, that first television appearance by the Beatles on ‘The Ed Sullivan Show’ is historic,” said executive producer Ken Ehrlich of AEG Ehrlich Ventures. “To be able to celebrate this significant event 50 years later — and to the exact day, date, and time — with an all-star cast of GRAMMY participants shapes up to be one for the books.”

“That night 50 years ago on the Ed Sullivan stage, the Beatles delivered a momentous performance, and America witnessed a historic television event and the beginning of a new era in music,” said Jack Sussman, CBS
Entertainment Executive Vice President of Specials & Events. “We are thrilled to honor these music legends with  performances from amazing GRAMMY-winning artists who were influenced by the Beatles’ unforgettable music through the years and that incredible performance in 1964.”

Tickets to the taping of this very special evening will be available for sale to the general public, and additional information will follow in the coming weeks.

“The Night That Changed America: A GRAMMY Salute To The Beatles” is produced by AEG Ehrlich Ventures, LLC. Ken Ehrlich is the executive producer.

Established in 1957, The Recording Academy is an organization of musicians, songwriters, producers, engineers and recording professionals that is dedicated to improving the cultural condition and quality of life for music and its makers. Internationally known for the GRAMMY Awards — the preeminent peer-recognized award for musical excellence and the most credible brand in music — The Recording Academy is responsible for groundbreaking professional development, cultural enrichment, advocacy, education and human services programs. The Academy continues to focus on its mission of recognizing musical excellence, advocating for the well-being of music makers and ensuring music remains an indelible part of our culture. For more information about The Academy, please visit www.grammy.com. For breaking news and exclusive content, follow @TheGRAMMYs on Twitter, like “The GRAMMYs” on Facebook, and join The GRAMMYs’ social communities on Foursquare, GetGlue, Google +, Instagram, Pinterest, Tumblr, and YouTube.

GRAMMYS SALUTE TO THE BEATLES