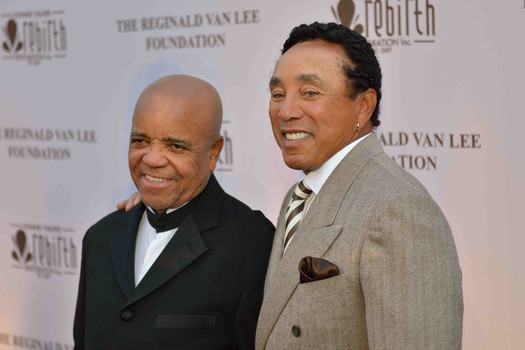 THE GRAMMY MUSEUM TO HONOR
BERRY GORDY AND SMOKEY ROBINSON WITH
FIRST-EVER ARCHITECTS OF SOUND AWARDS ON NOV. 11th

Motown-Themed Gala, Hosted by Randy Jackson, Will Take Place at
Club Nokia at L.A. LIVE and Will Help Celebrate the Museum’s Five-Year Anniversary

Boyz II Men and Kelly Rowland Are the First Artists Announced to Perform at Gala Tribute Concert, with Proceeds Benefitting Museum Programs Motown founder Berry Gordy and GRAMMY® winner Smokey Robinson will be honored with The GRAMMY Museum®‘s first-ever Architects of Sound Award, it was announced today by Bob Santelli, executive director of the Museum.

Proceeds from the inaugural GRAMMY Museum benefit gala dinner and concert — to be held on Monday, Nov. 11, 2013, at Club Nokia in Los Angeles — will provide essential support for the Museum, an educational and interactive museum dedicated to engaging both children and adults in the power of music through dynamic exhibits, educational programs, live performances and more. The event will be hosted by music industry veteran and television personality Randy Jackson.

“We are honored to celebrate both Berry Gordy and Smokey Robinson as the first-ever recipients of the Architects of Sound Awards,” said Santelli. “Their contributions to Motown have truly changed the landscape of American music. We are grateful to these extraordinary industry leaders who will be helping us celebrate not only our first gala, but also our upcoming five-year anniversary of The GRAMMY Museum.”

Berry Gordy is the founder of Motown Records, the hit-making enterprise, birthed in Detroit, that nurtured the careers of Smokey Robinson and The Miracles, Diana Ross and The Supremes, Stevie Wonder, Marvin Gaye, The Temptations, Michael Jackson and The Jackson 5, and many other music greats.

Berry Gordy’s unparalleled contribution to music and popular culture is chronicled in his autobiography, To Be Loved: The Music, The Magic, The Memories of Motown.

It is the basis for his play, Motown the Musical, which had its world premiere on Broadway on April 14, 2013, garnered four Tony nominations, with the New York Times calling it “the biggest box office hit of the year.”

He has received numerous awards including the GRAMMY Legend Award, The Recording Academy® Lifetime Achievement Award, Honorary Doctorate (Howard University), and the National Medal of Arts Award from the President of the United States.

He has also been inducted into the Rock and Roll Hall of Fame, The Songwriters’ Hall of Fame and has been honored at The Kennedy Center. Born and raised in Detroit, Robinson founded The Miracles while still in high school. They were the first group managed by Berry Gordy.

The Miracles dominated the R&B scene throughout the 1960s and early ’70s, and Robinson became Vice President of Motown Records serving as in-house producer, talent scout and songwriter. In addition to writing hits for the Miracles, Robinson wrote and produced hits for other Motown greats including The Temptations, Mary Wells, Brenda Holloway, Marvin Gaye and others. Following his tenure at Motown, he continued his impressive touring career and released several successful solo albums.

Robinson continues to thrill sold-out audiences around the world with his high tenor voice, impeccable timing, and profound sense of lyric.

Never resting on his laurels, Robinson remains a beloved icon in our musical heritage. In early 2014, Robinson plans to release a duets collection of his greatest hits and compositions performed with today’s top recording artists.
================

The 2013 GRAMMY Museum Architects of Sound Gala will begin with a reception and touring of the GRAMMY Museum, followed by a dinner and awards presentation, hosted by Jackson. The celebration will culminate with a concert, produced by Ken Ehrlich Productions, featuring four-time GRAMMY-winning group Boyz II Men and four-time GRAMMY winner Kelly Rowland. In addition to serving as a GRAMMY Museum Board member, Ken Ehrlich has produced the GRAMMY Awards® telecast since 1980 and is responsible for the creation and presentation of the show’s most iconic GRAMMY moments during that time.
============

The GRAMMY Museum is an independent, 501(c)(3) non-profit organization created as a partnership  between The Recording Academy and AEG. Paying tribute to music’s rich cultural history, the one-of-a-kind, 21st century Museum features interactive, permanent and traveling exhibits — with four floors of dynamic and engaging multimedia presentations — and is located within L.A. LIVE, the downtown Los Angeles sports, entertainment and residential district.      ============
=============