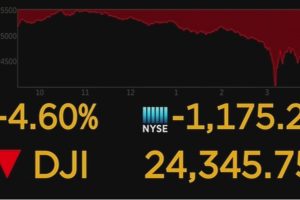 Stocks Crash – “This Is Just the Beginning” | Jim Willie

In the biggest global sell-off since 2016, financial markets from Asia to Europe to the United States were rocked primarily by concerns about inflation.

The Dow Jones Industrial Average lost 4.6% and suffered its largest-ever point decline at 1,175 on Monday — with the losses continuing to deepen in the overnight futures session, pushing the index down nearly 1,500 points to test its intra-day low. The catalyst was a continuation of the selling pressure seen on Friday related to inflation fears, higher bond yields and faster-than-expected wage growth.

But really, this is about long dormant volatility making a reappearance and shocking overly complacent investors. And boy, was it intense with the Dow Jones down 6.3% at its lows or nearly 1,600 points. The S&P 500 lost 4.5%, while the Nasdaq Composite lost 3.7%.

Adding to the intensity and fright of the decline were signs of stabilization near the open, with the Dow Jones actually moving into positive territory for a time as the situation seemed to clear. Then the selling intensified as the S&P 500 and Dow lost their 50-day moving averages. Large caps surrendered their gains for the year-to-date.

The Dow suffered its worst point decline ever Feb 5th 2018. Jim Willie tells us this stock market carnage is nothing compared to what is to come… Jim Willie is back and he’s not pulling any punches. Jim says, right off the bat, that we now have the makings of a major financial crisis, just like Jim has been predicting for years now.


Gerald Celente – The Market ‘Crash’, Why And What’s NEXT