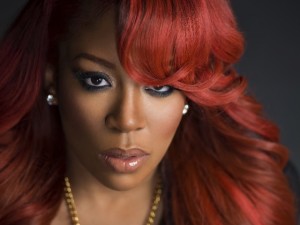 Atlantic recording artist K. Michelle has announced early details of her eagerly anticipated winter headline tour. Dubbed “The Rebellious Soul Tour with K. Michelle and Special Guest Sevyn Streeter,” the US trek is presented by BET’s “Music Matters,” the network’s influential campaign highlighting the next generation of superstars. Accompanying Michelle as special guest on all dates will be her Atlantic labelmate, singer/songwriter Sevyn Streeter.

Known to millions as a cast member on the hit VH1 series Love & Hip Hop: Atlanta, K. Michelle will embark on “The Rebellious Soul Tour” to celebrate her blockbuster new album, “REBELLIOUS SOUL.” The acclaimed album made a stunning #1 debut atop Billboard’s “Top R&B/Hip-Hop Albums” chart upon its release earlier this summer. Furthermore, the album entered the overall SoundScan/Billboard 200 at #2 – the highest debut on the main chart for a female R&B singer’s first album since March 2001.

“REBELLIOUS SOUL” is highlighted by the hit single, “V.S.O.P.,” which is currently a top 10 track on the BDS Urban Airplay Chart and has already broken the top 10 on Billboard’s “Hot R&B/Hip-Hop Songs” tally. The companion video for “V.S.O.P.” has garnered over 5 million views on K. Michelle’s official YouTube channel (https://youtu.be/X5y9Q5CmWYg).

In addition to its massive popular success, “REBELLIOUS SOUL” has also received widespread critical applause, with the New York Times hailing it as a “milestone…it has the confidence of survival.” Vibe praised Michelle’s “triumphant vocals,” singling out “V.S.O.P.” as “energetic and infectious…(the album’s) shining star.” As if that weren’t enough, “REBELLIOUS SOUL” has also proven an international sensation, with the UK’s The Guardian awarding it four-out-of-five stars, calling it “dramatic and raw… the emergence of a vital voice.”

Having spent much of her career behind the scenes, Sevyn Streeter is now taking some spotlight for herself. The Florida-based artist has proven an in-demand writer and vocalist, called upon by a remarkable roster of top studio superstars, including Timbaland, Swizz Beatz, Babyface, and many others, with tracks featured on albums by such icons as Mary J. Blige and Alicia Keys. In 2011, Chris Brown’s massively successful “F.A.M.E.” saw Sevyn co-writing a number of the album’s biggest singles – including “Next To You (Feat. Justin Bieber),” “Wet The Bed (Feat. Ludacris),” and the million-selling smash, “Yeah 3x” – while her distinctive voice can be heard on such tracks as the top 5 R&B/Hip-Hop hit, “She Got You.”

“F.A.M.E.” proved a massive pop sensation, receiving RIAA gold certification and the 2012 Grammy Award for “Best R&B Album.”  What’s more, the phenomenal success of “Yeah 3x” and “Wet The Bed” earned Sevyn a prestigious pair of ASCAP Awards, acknowledging the tracks as among the year’s most-performed songs. Brown has since enlisted Sevyn’s songwriting services and vocal talents for 2012’s #1 blockbuster, “FORTUNE”- for which Sevyn received an additional ASCAP Award, as well as his upcoming album, “X.”  Among her other recent successes, Sevyn has co-written some of the year’s top tracks, including Brown’s “Fine China,” Tamar Braxton’s “All The Way Home,” Kelly Rowland’s “Gone,” and Ariana Grande’s chart-topping hit, “The Way (Feat. Mac Miller),” which soared to #1 on the iTunes Store within eight hours of its initial release.

Currently readying her long anticipated CBE/Atlantic Records debut, Sevyn has already begun establishing herself as a genuine R&B star in her own right. Her 2012 debut single, “I Like It,” earned extensive radio airplay and over 2 million individual views at Sevyn’s official YouTube channel, https://www.youtube.com/sevynstreeter The f.ollow-up, entitled “It Won’t Stop,” arrived earlier this year and soon ascended to the top 40 on Billboard’s “Hot R&B/Hip-Hop Songs” chart. A new spin on the track – now featuring her longtime collaborator Chris Brown – can be heard exclusively at https://www.youtube.com/watch?v=mzqv64-PTVg