As part of Music Matters’ initiative to provide a platform for emerging artists & DJ’s to showcase their talent, Music Matters will join forces with A3C, the preeminent hip-hop festival taking place over 5 days at dozens of venues throughout Atlanta, GA, on Friday, October 10, 2014. 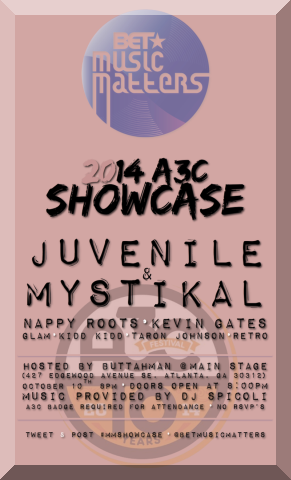 “Music Matters has a great history of showcasing the next superstars in hip hop down at A3C,” said Kelly G. Griffin, Senior Director of Music Programming, BET Networks. “We are proud to return on the 10th year anniversary to bring more exciting new hip hop stars alongside legendary southern performers Juvenile and Mystical. It’s been years since they have performed in Atlanta and we anticipate this being a goose bump, can’t-miss historical moment in hip hop.”

Winner of Creative Loafing’s 2014 “Best Of Atlanta,” the A3C [All 3 Coasts] Festival is a 360-degree celebration of Hip-Hop culture. The preeminent hip-hop festival in the US, A3C has grown from a local showcase to an amazing cultural experience and is celebrating 10 years in the game. Today, A3C is one of the largest hip-hop events in the world with performances from well over 500 artists, including: legends, rising stars, trendsetters, up-and-comers and aspiring talent from across the world. Founded in 2005, the 5 day festival encompasses all aspects of hip-hop culture: music, art, film, style, education and more. During the day attendees are able to connect with – and learn from – tastemakers, icons, organizations, brands and industry leaders, while the evenings and nights are filled with special events, parties and performances from some of the biggest and best hip-hop artists in the world.