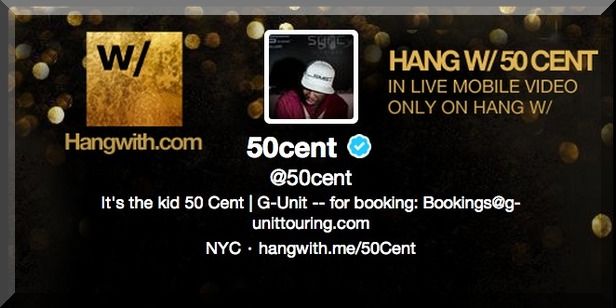 MEDL Mobile, makers of the live streaming app Hang W/ announced today that Curtis Jackson, otherwise known as 50 Cent, has invested an unspecified amount of money in Hang W/, and has agreed to use it as his exclusive live streaming video platform.

The “Hang w/” app connects people through live streaming video and simultaneous chat – allowing hundreds, thousands and eventually millions of users to “Hang with” their favorite people in real time.

The app has already been downloaded more than 600,000 times and has generated more than 10,000,000 user sessions. Jackson joined the platform in August and has been using it to actively Hang w/ his fans, having created more than 70 broadcasts since signing up just last month. In his broadcasts, 50 Cent has released previously unheard music, given sneak peeks of music videos, and brought his fans behind the scenes of his fast paced life.

“Live streaming mobile video is a completely new form of media,” said Jackson. “Hang w/ is poised to be the dominant player in this new media, and I’m prepared to throw my weight behind it to see that happen.”

“Jackson’s mind works both as an artist and as a businessman,” said Andrew Maltin, CEO of Hang w/ and MEDL Mobile. “He’s experimenting and pushing the creativity of what we’ve seen on Hang w/. At the same time, he recognizes that it’s more than just content he’s creating. It’s a new market opportunity.”

From music, Jackson expanded his empire to include several entrepreneurial endeavors. He worked with Glaceau to create a vitamin water drink called Formula 50. Coca-Cola purchased Glaceau for US$4.1 billion. Forbes estimated Jackson earned $100 million from the deal after taxes.

50 CENT’S entrepreneurial ambitions also extend towards philanthropy. Sales of his energy shot called SK Energy Shots aid in combating world hunger. For every purchase of SK Energy Shots, a portion of the sales will go to providing a daily meal to an underprivileged child in Africa. SMS Audio also follows a conscious capitalism model, contributing a portion of sales proceeds to combat hunger in the U.S.

“Hang w/ fits seamlessly in to my overall business strategy,” added Jackson. “I see ways to use it to promote my headphones, apparel, energy shots, film and TV projects, my boxers, and even my philanthropic endeavors.”