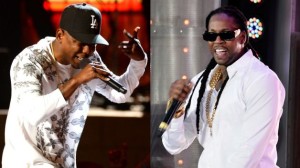 French Montana and ScHoolBoy Q will also hit the stage.

The lineup for the 2013 BET Hip Hop Awards is starting to take shape. In addition to MC Lyte receiving the lifetime achievement honor (the I AM HIP HOP AWARD presented by Sprite), Kendrick Lamar, 2 Chainz and French Montana are now among confirmed performers; and Kevin Hart — a.k.a. Chocolate Droppa — is a confirmed presenter.

2 Chainz and French Montana have both had big years with the release of their albums. 2 Chainz’ B.O.A.T.S. II #METIME debuted atop Billboard’s Top Rap Albums; and Montana’s long-awaited debut, Excuse My French, entered the Top 200 albums chart at No. 4.  rawdoggtv.com

Lamar, a Music Matters star, has had a standout year as well, lyrically and visually continuing to push the culture forward with his videos “B—h, Don’t Kill My Vibe” and “Poetic Justice” and lighting a fire in hip hop with his verse on “Control,” garnering responses from OGs and up-and-comers alike — even Chocolate Droppa dropped a sweet 16 seconds.

The “hip hop crew” theme will also take center stage to set off the awards. Taking on one of the art form’s oldest and most cherished traditions, squad members of hip hop’s finest groups and indie labels will battle it out crew vs. crew-style for the much-loved Hip Hop Awards Cypher. Those participants, however, will not be announced until after the Sept. 28th taping at the Boisfeuillet Jones Atlanta Civic Center.https://bethiphopawards2007blog.com

The HHA will have its premiere broadcast Tuesday, Oct. 15th at 8 p.m. and will air on BET’s international network in the U.K. and Africa Friday, Oct. 18th, reaching more than 17 million households in more than 50 countries.

Click here to read BET.com’s exclusive interview with MC Lyte about the I AM HIP HOP Award!

BET.com is your #1 source for Urban celebrity news, photos, exclusive videos and all the latest in the world of hip hop and R&B music.