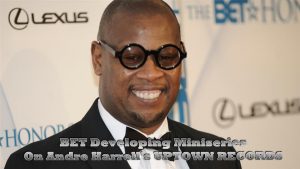 Launched in 1986, following a joint venture deal with MCA, Andre Harrell’sUptown Records played a vital role in the careers of some of the most influential voices in hip hop, soul and R&B, including Heavy D & The Boyz, Russell Simmons, Lyor Cohen, Mary J. Blige, Jodeci, Father MC, Al B. Sure, Christopher Williams, Teddy Riley, Notorious B.I.G., Sean “Diddy” Combs and many more.

Each gripping episode will take viewers from the label’s inception to current day, featuring the music and powerhouse hit-makers that helped mold what would come to be known as the Uptown ‘sound’ and define a musical era that would impact generations to come. “Uptown” is scheduled to premiere on BET in 2020.

Andre Harrell is one of the leading entertainment entrepreneurs and cultural architects of our time.  His legacy includes the founding of the seminal music label, Uptown Records, the launching of Bad Boy Records, serving as the CEO of Motown Records, the Creator and Executive Producer of Fox TV’s “New York Undercover” – the first multicultural major television network drama ever, the Creator and Executive Producer of the two motion pictures that launched the careers of both Halle Berry (“Strictly Business”) and Jessica Alba (“Honey”), and the founder of the “cross-cultural” advertising agency, “Nu America.”

With Uptown Records, Harrell launched and molded the careers of Heavy D, Jodeci, Al B. Sure, Teddy Riley, Guy, Sean Combs, and the legendary queen of hip hop soul, Mary J Blige, effectively changing the sound of R&B music and receiving the Billboard Magazine award for the most number of charted singles in a single year.  As the CEO of Motown, Harrell oversaw the careers of iconic artists such as Stevie Wonder, Diana Ross, and Queen Latifah, while launching the careers of Mario Winans and 98 Degrees.  In 2002 Harrell founded his second record label, Nu America Records, where he signed Robin Thicke and executive produced the biggest single and most played song in the history of radio with Thicke and Pharrell’s “Blurred Lines”.

Harrell’s legacy is that of one of the top executives and architects of hip hop culture who effectively changed the way not only America, but the world now identifies with and emulates Urban American culture on a global stage.  Ultimately, Harrell’s work and mission has been to serve a higher purpose:  to elevate Urban culture in a way that gives Urban Americans a sense of self-worth and self-dignity, while providing a pathway of empathy so that all people can relate to and draw from the beauty of that culture.